WASHINGTON (AP) — President Donald Trump’s impeachment night crack that the late Michigan Rep. John Dingell might be “looking up” from hell drew wide scorn and scant defense from his allies Thursday, on the cusp of the 2020 election year and just days before Christmas.

“I was already having a really hard holiday,” Democratic Rep. Debbie Dingell, the congressman’s widow, told reporters in the Capitol. To the president, she tweeted: “Your hurtful words just made my healing much harder.”

Trump’s swipe at John Dingell, who died in February, came in swing-state Michigan on Wednesday night as the House voted to impeach him on abuse and obstruction charges. Onstage, Trump quoted Debbie Dingell as having thanked him for “A-plus” treatment after her husband’s death.

“John would be so thrilled,” Trump quoted Dingell’s widow as saying. “He’s looking down.”

Trump quipped to his audience in Battle Creek: “Maybe he’s looking up. I don’t know.”

Dingell, an Army veteran who spent 59 years in Congress, served longer than anyone else in U.S. history.

It was the president’s latest attack on a deceased veteran and his family, part of a community of 20 million Americans that Trump claims to revere. Since the 2016 presidential campaign, Trump has aimed particular ire at Republican Sen. John McCain, even after the Arizona senator’s death from brain cancer in 2018. 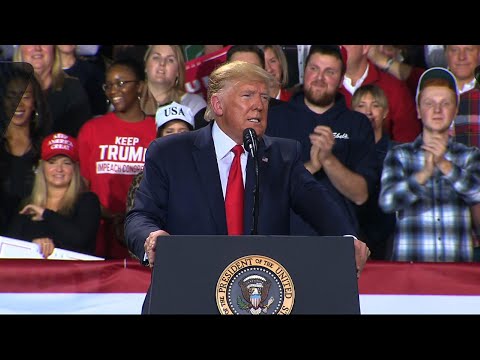 He has also harshly criticized the family of Humayun Khan, an Army captain killed in a car bombing in Iraq as he tried to save other troops. Khan’s Muslim father spoke out about candidate Trump at the Democratic National Convention in 2016.

Trump’s attacks Wednesday night on the late Dingell — during the president’s longest-ever campaign rally, at two hours and one minute — drew rebukes even from his staunchest allies.

“If he said that, he should apologize,” said Republican Sen. Lindsey Graham of South Carolina, a retired Air Force defense lawyer and prosecutor who served in Iraq and Afghanistan and was awarded a Bronze Star.

Added GOP Rep. Fred Upton of Michigan in a tweet: “I’ve always looked up to John Dingell – my good friend and a great Michigan legend. There was no need to ‘dis’ him in a crass political way. Most unfortunate and an apology is due.”

“John served his country very well,” House Republican Leader Kevin McCarthy said. “I think he made a great contribution to America. … I considered him a friend.”

White House press secretary Stephanie Grisham said on “CBS This Morning” that people should remember that Trump is the one who had been under attack by the House.

“Tensions are high,” she said. “A lot of riffing was going on.”

Trump on Thursday did not answer a question in the Oval Office about whether he will apologize to Debbie Dingell.

The political stakes were high, as well. Trump narrowly flipped Michigan for the GOP in 2016 for the first time since 1988, and it remains a ferocious presidential battleground for the state’s 16 electoral votes. It seemed no coincidence that he chose to hold a rally in the state on the very night the House made him the third impeached president in history.

But his attacks on prominent veterans remained a puzzle because veterans are more likely to be Republicans than Democrats. In the 2018 midterms, a majority of veteran voters, 55%, supported Republican candidates in House races across the country, according to AP VoteCast, a survey of the 2018 electorate. Roughly the same share expressed approval of Trump’s job as president.

Similarly, a Pew Research Center survey in May found 57% of veterans approve of the way Trump handles his duties as commander in chief. That survey showed veterans were more likely than the American public to think Trump has respect for them.

Dingell’s case, some observers suggested, may have been an example of Trump’s willingness to attack just about anyone if he thinks doing so will help him — or if he holds a grudge. He’s gone after people with disabilities, women, journalists, investigators, diplomats, intelligence officials and current and former members of his own administration.

It’s something John Dingell himself remarked upon when delivering his “last words for America,” dictated to Debbie on the day he died. In it, he laments the “presidential bully pulpit” being used to denigrate others — “often in the most irrelevant and infantile personal terms.”

“What the president misunderstands is that cruelty is not wit,” House Speaker Nancy Pelosi said at a news conference Thursday. “Just because he gets a laugh for saying the cruel things that he says doesn’t mean he’s funny. It’s not funny at all. It’s very sad.”

Debbie Dingell, who replaced her husband in Congress, said that some 20 people, all Republicans, lined up Wednesday night on the House floor to say they were sorry for Trump’s remark. “Friends at the White House,” whom she declined to name, called to check on her.

“That they love me. That what he said was wrong,” Dingell said. “A lot of people were apologizing.” She said other members of the Michigan delegation were particularly supportive.

“I miss John and anybody who knows me knows he was the love of my life, and I have a really hard time,” the congresswoman said. “But he would also tell me, ‘Woman, get on with it and do your job.’ So I’ve been trying to do my job.’’

The messages of support continued to flow Thursday, including from Republicans.

“Merry Christmas Debbie, you deserve to be able to heal in peace,” tweeted Rep. Dan Crenshaw of Texas, a former Navy SEAL. “Those comments,” he added, “were totally unnecessary.”

Politics: Protests or not, politics…